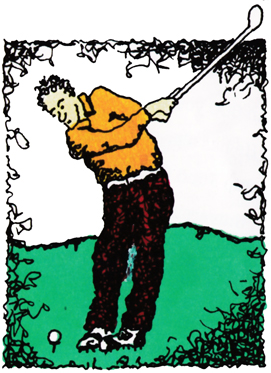 The human condition is to be concerned about what others think of us. We have a great need to demonstrate our competence, and when we believe our actions or behaviors dictate otherwise, we can get extremely nervous and anxiety-ridden. Einstein called focusing on the affection from others a prison. We can ruin our golf game when we become locked into what others think of us. When we become too self-conscious about our impression upon others, we will decrease our learning potential as well as our ability to compete. Thus, the self- conscious student is a subject which needs to be addressed.

But this problem is not new. Ben Franklin knew about this mental prison of human insecurity and wrote about it more than 200 years ago in Poor Richard’s Almanac. To illustrate our great fear, he wrote a parable about a donkey, a young man, and an old man. In this story, both the young and old man worked far away from their homes. So they decided to buy a donkey to ride to work. Their journey took them through a few neighboring towns. When they arrived at the first town, the young man was riding the donkey. Upon seeing this site, one townsperson shouted to them, “Why don’t you let the old man ride that donkey, he is frail and needs the help, not you.” Upon hearing this, they decided to switch positions and continued on their journey with the old man riding the donkey. When they reached the next town, a townsperson shouted, “Why don’t you let the young kid ride the donkey. You are old and need to walk and get the exercise.” Now, they both believed no matter who rode the donkey, they could not please everyone. They decided to throw the donkey off a bridge and just walk home themselves.

Forget the donkey. This prison of pleasing others can drown a golfing career. Ask Ian Baker-Finch, the winner of the British Open in 1991. Within seven years of his major victory, he had retired from professional golf. Many factors contributed to this decision, one being his humiliating open round of 92 at the British Open at Troon and another being his missed 32 straight cuts on the tournament trail. However, Baker-Finch mentioned that the main straw that caused him to leave the tour was the pressure of what everyone was thinking about his poor play. Poignantly, he stated, “What I would like to be able to do is to change my name, come back in a different body and go play without the pressure of being Ian Baker-Finch.”

But Ian Baker-Finch is not unique in his thinking. Golf instructors will have many students that are self-conscious. They are so concerned about what others think that they can become paralyzed in their learning. With this concern, their muscles tighten and they lose control over their movements, resulting in a poor learning experience.

This type of thinking is not just pertinent to beginners, however. Many advanced players are self-conscious, worrying about their impression upon others. This performance anxiety can ruin any competitive round, if it gets out of control. The following is advice for golf teachers to reduce the self-consciousness in their students.

Focus on the process
Players can be self-conscious because they are focusing on the outcome of the shot. They are worried about hitting a good-looking shot, one that flies high, long and straight. When a student hits a desired shot, then he will look good. The golf teacher should decrease the importance of outcome. Suggest to the student that the process of the swing is key. Making the correct movements is more important than where the ball ends up. A student has much more control over making the correct movements than the outcome, and thus, their self-consciousness will decrease.

People are not concerned with you
The golf teacher should also emphasize to the student that people are primarily concerned with their own game. Most golfers can tell you every shot they hit, but many will not remember any of their partners’ shots. When a student realizes that the focus is not upon them, the pressure is off to perform. When the pressure is off, the self-consciousness decreases.

Share the experience: Do the Yo Yo Ma
When you have an experienced player, tell them to do the “Yo Yo Ma.” Most people have heard of Yo Yo Ma, the famous cellist. He is world-class, but he still gets nervous before going onto stage. So, he uses a key mindset to quell his self-conscious thinking. Yo Yo Ma thinks about sharing the music with the audience instead of trying to demonstrate how good a cellist he is. When he is sharing with others, he loses his self-consciousness. Suggest to your students to share their good golf with others. Also, suggest that they
de-emphasize the need to impress.