One fine spring day, my good friend Brian Schuman from Long Island rung me up and asked a
question. “Mike,” he said, “there are six of us Americans going to Scotland for the
World Hickory Open, right?” “Yes,” I replied. He went on. “So maybe we can arrange a match with a group from Scotland or from other points?” Thus was the background and origin of the Hickory Cup.

We contacted another good hickory-playing friend in Virginia, Rick Woeckner, who jumped on the idea. He contacted World Hickory Open founder and director Lionel Freedman and posed the idea to him, and almost immediately a team from what we called the World Select was formed – Select meaning that Lionel made a few phone calls and let it be known that some Americans were coming for a little row on the tartan turfs of Angus.

The match was on, soon followed by several catcalling e-mails back and forth across the Atlantic seaway. All in good fun, of course. It was not long after in our travels to American hickory tournaments that others heard about our little
adventure and asked how they might sign on. One, then another, then another. This prompted Brian, an event
coordinator by trade, to go into action. He purchased a trophy to be named the Hickory Cup, and proposed the match be called the US Hickory Players Club vs. The World Select. Like the big bang, our little idea was expanding. Next, he arranged for uniform sweaters and ties (no gentleman golfer plays without a tie) and developed a website to chronicle the matches and players. I can only imagine that the Ryder Cup began in similar fashion.

As spring turned to summer, more fellows jumped on board, and the final tally of former colonists (as Lionel likes to refer to us) was 15. Soon, the format was set, and the match would be conducted the day after the World Hickory Open at Arbroath Links in Carnoustie Country, the recognized home of golf in Scotland. Rick was our designated
captain and travel guide, coordinating everyone’s flight information and hotel reservations.

Amazingly, we all managed to arrive at Edinburgh International at the designated time to gather our automobiles and head to Aberlady for a warm-up round at Craigielaw Golf Club as guests of none other than the club captain Lionel
Freedman. The day could not have been more perfect: a bright sun and 62 degrees with a mild breeze. From
there, it was a two-hour drive to our headquarters, the Carnoustie Golf Hotel, overlooking the hole where Jean
Van de Velde went brain-dead on his way to losing the greatest tournament in the world.

First up on our voyage was the World Hickory Open, a tournament conceived by Mr. Freedman in 2005 as a tribute to the game’s great players of the past and the origins of the game. This year, the venue was the 451-year-old Montrose Links, a fantastic piece of land along the sea. Nine holes out and nine back. The old gem was up to the task as a fierce wind blew in during both days of the tournament. Scores soared on the hard and fast layout, but Swiss pro Paolo Quirici, the US Professional Hickory champion, managed to add the title to his growing resume in hickory golf. Were it not for a very unruly putter, I might have finished much higher than 10th place. My ballstriking was brilliant, but the flat stick was just that – flat. Oh well, story of my life lately and typical of my year. A lot of opportunities, but just unable to make the putts necessary for victory. Still, there was more golf to be played. Time to prepare for the Hickory Cup. 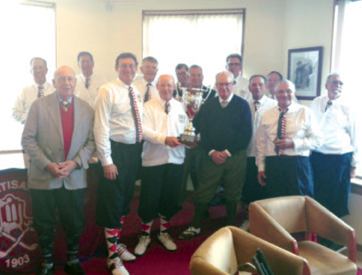 The morning of the great hickory match was gray and windy, but no rain. A perfect Scottish day, as they say. The flags of each country were proudly flying as the teams gathered for the ceremonial first tee shot by a 60-year Arbroath member. The format of the match was six holes four-ball, six holes alternate shot, and six holes individual, with a point awarded for each win. Rick and I were off first against brothers Joe and John Smith, pros from England. Joe is a member of the European USGTF and a bareknuckles
fighter in addition to playing on their version
of the Web.com Tour. Quite a combo, but a great guy as
is John, who I would play in singles. Our matches were
back and forth throughout. We lost the first match on the
last hole, won the second match on the last hole, and
split our singles matches. Believe it or not, I managed
to sink putts on the final hole of the second and third match to record a split on our day. Round one – USA 2, World Select 2. Steadily, the matches rolled in and the nail-biting began. The match score stood at 8-8, then 11-10, and 13-
11 in the USA’s favor as the final foursome came down the 18th hole. Anxiously, we waited. It would require 14½ points to secure victory. As the men shook hands on the green, we were unable to detect the winning side. It seemed an eternity as the two sides tallied up the totals. Into the clubhouse they came. USA 3, World Select 1. Final score: USA 16, World Select 12.

Pop the corks, let the party begin. Well, not quite. The celebration was very respectful, because the whole day was about friendship. Our intent was to make new acquaintances and promote the game of hickory golf. Judging by the smiles on everyone’s faces, we certainly accomplished that. A great time was had by all, and the Arbroath club could not have been more gracious hosts. All journeys start with a first step. We believe this first step will be the start of a tradition for many years to come. A rematch next fall has already been scheduled on the courses at Monifieth, another wonderful venue with a great tradition. The former colonists plan to be back in force.

A lot of people think us fools for not taking advantage of all the modern technology available to make the game easier. We often struggle to define what makes playing with equipment from days long gone so enjoyable. It just is. The feeling of a well-struck iron or wood from a hickory shaft is exhilarating. Walking on links where the game was played for hundreds of years truly fills you with the spirit of the game. For more information on hickory golf and how to get involved, please go to www.hickorygolfers.com.