The Driver and The Student

It is the most glamorous club in the bag. It can send the ball soaring much farther than the longest home run Hank Aaron or Babe Ruth ever hit. Along with the putter, it is the most 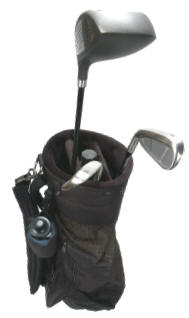 rewarding, frustrating, fulfilling, and anger-inducing club we use. Of course, we are talking about the 6-iron.

Over the past 10 years, the driver has been the most talked-about and scrutinized weapon in a golfer’s arsenal, due to the rapid evolution of the technology of the club. Pro golfers are hitting the ball 30 yards farther, on average, than they did with the old persimmon drivers. It seems no one has a neutral opinion on the longest, yet lightest, club in the bag.

Students either love or hate their drivers – there seems to be no in-between. Students who enjoy hitting the driver find that teeing the ball up, along with using a sweeping, free-flowing swing, will propel the ball reasonably well.

Those who loathe the driver likely do so because of the somewhat unforgiving nature that low loft on a clubface can produce. It is quite easy to produce sidespin if the driver face isn’t square. A clubface that is open or closed just 5 degrees means a 250-yard drive will be 22 yards off line, enough to find the rough on a typical 40-yard wide fairway. The length of the driver, combined with a sweet spot that is farther away from the shaft than with other clubs, makes the driver harder to hit from that perspective, too.

Many students compound their driver woes by not using one with the proper specs for their swing. Too often, they use drivers with shafts that are too stiff and lofts that aren’t high enough.

To get our students to make friends with their drivers, we must start with the equipment. Driver heads today come in all sorts of shapes and internal weight profiles. Your student needs to find a driver that is right for their swing. If they fight a slice, an offset driver head or one with heel weighting can help. If they have a smooth transition move or clubhead speed that is less than 100 mph, a regular shaft may be the right call.

According to a recent Golf Magazine article, the average male golfer has a clubhead speed of around 90 mph, with an initial ball speed of 135 mph. This player needs to launch the ball around 14 degrees with approximately 2,900 rpm to achieve maximum carry. Driver specs will vary between players, but most golfers in this range won’t go wrong with driver loft of 10° or higher. A regular shaft would probably fit most, with a faster-tempoed player needing a stiffer tip section.

Technique-wise, our students need to suppress the urge to continually play the long ball. This urge leads to swings being made out of sequence, usually with the arms and hands playing a dominating role to start the downswing.

The stance should be square – a big reason for an over-the-top swing is the foot stance being closed. Try to get your students to relate their driver tempo with that of a mid-iron. If they can do that, they should be able to make more consistent, solid contact.

The driver can be fun to hit, but it can also be the most dreaded club in the bag. With the proper equipment specs and a little swing know-how, driving the ball well can become a tremendous weapon for your students to use.