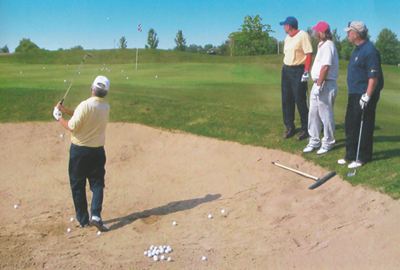 Most poor players dread it, while most good players relish it: the greenside bunker shot. The difference is that poor players have bad technique and a lack of confidence, while good players know that this shot offers one of the largest margins of error in golf.

Proper sand explosion technique hasn’t changed in many years. The player should have an open stance, an open clubface relative to the stance (with the end result the clubface only slightly open to the landing point), and a swing path to the left of the target line (for right-handers).

Having said that, there are a number of good teachers who believe that the standard technique is too hard for many players to handle. These teachers advocate a square stance and a square clubface, with a hitting technique best described as hitting a pitch shot intentionally fat. This method does indeed work, but requires a sand wedge with a fairly large degree of bounce in the flange. As opening the clubface has the effect of putting the bounce on the flange to work in a typical sand wedge, this extra amount of bounce is necessary to produce the same effect with a square clubface. A sand wedge with a larger flange, too, is helpful in this case.

There are several typical errors that amateurs make as a group:
STANDING TOO FAR AWAY FROM THE BALL.
When this happens, an up-and-down chopping motion is likely to result. The toe of the clubhead is also too high.
The ball, on most shots, doesn’t escape the sand without the golfer taking a mighty rip at it.

SCOOPING WITH THE DOMINANT HAND.
This is a common tendency in all short game shots. In the bunker, it leads to entering the sand too early or skulling the ball. Two drills that help are the “claw” drill (a doubleor triple-overlap grip), and letting go with the trailing hand at the moment of impact. Both drills get the lead side to do its fair share of the work and to get the body rotating through the shot. Another variation is to have the student hold the club in his dominant hand with his thumb and forefinger only.

TAKING THE CLUB TOO FAR INSIDE ON THE BACKSWING.
With an open stance, the clubhead should be over the extension of the target line for at least the first two feet of the backswing. A backswing that is too far inside tends to result in fat shots, or if the club enters the sand at the right point, low or uncontrolled shots.

WEIGHT ON THE REAR FOOT AT IMPACT.
The weight should be mainly on the forward foot at address and throughout the shot. This allows the clubhead to enter the sand with the proper angle of descent. A good drill to demonstrate this is to have your student draw their
rear foot away from the target line perpendicularly 12 inches or so, and then touch the ground with that foot with the toes only.

SHOTS THAT LEAVE THE SAND LOW AND PULLED.
This is almost always the result of a grip that is too strong. The clubface turns over through impact, resulting in
a closed clubface. Many teachers like to advocate the bottom hand being held more in the middle of the fingers, with the “V” pointing towards the chin, to alleviate this problem. In fact, many good players automatically do this with their grip in the sand.

LITTLE OR NO WRIST COCK ON BACKSWING.
This leads to scooping and worse. The wrists should be cocked fairly quickly on the backswing to allow a proper
angle of descent on the downswing, but should not be done in an exaggerated, artificial manner. When it comes to drills, a favorite of many teachers is to draw a line in the sand and have their students practice hitting the line with their downswings. Then, a ball is placed approximately 3-4 inches in front of the line, with the thought of still striking the line. This is a good drill for students who have fairly decent technique but inconsistent entry points in the sand.

Other teachers do a variation where they outline a dollar bill-size hitting area in the sand, and ask the student to “remove” the dollar. Once the student gets proficient at this, a ball is placed in the middle of the outline.

One inexpensive training aid is a 2×4. Place some sand on top and get the student to displace the sand. Once they are proficient at that, place a ball on top of the sand on the board. Even the worst beginners should have success with this drill, which teaches the concept of displacing sand, and also should help develop their confidence.

Upon seeing a buried lie, the first thought even among accomplished players is “Oh no,” or more likely, “Oh $%&@!” Fear not – this shot is actually not that hard. A square stance, a square clubface, and the ball positioned in the middle of the stance is the proper setup for this shot. The clubhead is then “buried” in the sand on the downswing with a steep blow, more steep than with a regular shot. Executed correctly, the ball will pop out surprisingly high with either slight topspin or no spin. This shot can indeed be controlled with practice.

Finally, one thing to check is to make sure your students actually have a sand wedge. Many don’t, and to try this shot with a pitching wedge is very difficult, especially at their general skill level. With the proper tool, a little know-how and a lot of practice, your students should no longer fear the sand.