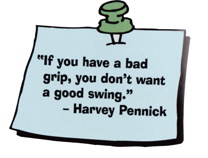 Ask any teaching professional what they work on the most with their students, and the answer is pretty predictable: the setup. Not surprisingly, there has been more written about the setup than any other aspect of teaching the game – and for good reason.
Grip, posture, alignment, balance, aim, grip pressure, stance, head position, and ball position all, most definitely, influence the type of golf that’ll be realized. The plane of the swing, ball flight, consistency of the motion, quality of contact – these are all greatly affected by the setup. For many students, however, teaching good setup fundamentals can lead to information overload. Although often difficult to do, you’ve got to keep it simple and doable for the student. And, perhaps most importantly, you’ve got to realize that there will be variances.

But first, a few more words (from people you’ve heard of) about the importance of the setup. (It’s never a bad idea to quote people who are known for knowing a thing or two about the game. See notes.)

If your golf swing is a movie, your setup writes the script. But, as mentioned earlier, because there are so many components of a good setup, students can easily be overwhelmed with all the words that comprise “the script.” And, if you’re not careful, teaching the setup can evolve into a fairly long, boring, too-complicated epic that will leave the student wishing he or she had opted for the simple sitcom version.

Here, then, are some of the things you really can’t leave out when going over the infamous “setup.”

The Grip
Arnold Palmer’s dad, Milfred J. Palmer, taught young Arnie how to properly hold the club when he was three. Palmer confessed it was the most important thing about golf he ever learned. Obviously, your hands are the only part of you attached to the club. They determine a lot. Personally, I spend as much time as needed in putting the handle in the correct position in the top hand. When the student positions the club properly in the top hand, good things happen: the clubface stays square, the hands and arms can relax and hang straight, the club isn’t weakly thrown from the top nearly as often, the wrists can hinge properly, etc. With a good grip, the club can be used like a whip. It can be swung. Ultimately, no one has ever played this game well without having the ability to “let it go” and create some speed. A good grip allows that and it cannot be overlooked.

That said, many outstanding players have mediocre or unconventional grips. Paul Azinger, Fred Couples, Corey Pavin, and Dave Barr don’t have particularly “correct” grips, but look at their swings. Each grip is a wonderful match for the motion. A teacher should never say a grip must be exactly “neutral,” but, for the most part, this is what you want to teach the beginner.

Posture
Obviously, good golf swings involve rotation and swinging the club on a good plane. Good posture – such that allows the upper body to turn and the lower body to resist – is vital for this. When the posture is sloppy, generally the swing will be sloppy as well, leading to sliding, too steep a plane, poor balance, alterations in spine angle, etc. Instructors should teach every beginner student the benefits of good, relatively sharp angles at address. And, certainly, instructors must always be willing to revisit posture – which includes spine angle, knee flex, and weight distribution – when their regular students come for help and require a fix.

Tiger Woods likes to feel like a shortstop preparing to make a move on the ball. You’d do well to have all your students feel “athletic” over the ball. If that means a wider than normal stance, so be it. Try not to nitpick if the student isn’t perfect. Get them in the basic position and push back on their shoulders. The goal is for the student to remain stable, balanced, and strong on their feet. If they wobble, they need to adjust their position.

Alignment and Ball Position
Over the years there has been plenty of confusing, conflicting, and varying philosophies on aim and alignment. Personally, I like the position taken by Hank Haney on this subject. That is, aim and alignment are totally different. First and foremost, explain what good alignment is – feet, knees, thighs, hips, arms, shoulders, and eyes all lined up parallel and slightly left of the target – then tell them that aiming will be much easier after they develop good alignment. Unques­tionably, good shots are much easier to hit with good alignment. After all, why learn how to aim at the target when you can’t hit it straight? This approach makes sense to me. And, not surprisingly, thousands of other instructors agree and follow this principle.

As far as ball position goes, it’s not an exact science! But, having good posture, a good grip, and the arms hanging down should be a constant. So, the club you have in your hands determines the distance you should stand from the ball. Ball position within the stance is also not an exact science. However, with the long clubs, most golfers will find success with the ball positioned somewhere off, or just inside, the front heel. With the shorter clubs, the ball should be positioned more toward the center of the stance. For most beginner and recreational players, it really doesn’t need to be much more compli­cated than that. The goal, of course, is to strike the ball at the bottom of the swing arc. But, if the bottom of the arc is always changing due to excess body motion, wouldn’t it make most sense to work on that issue before the student gets too preoccupied with a precise ball position? I think so.

Naturally, when going through that relatively simple “script” (here’s a tip: having a good delivery always helps), your beginner students shouldn’t feel too overwhelmed. Of course, many of them will still get over the ball and tirelessly go through the “checklist.” So, finally, something else that should be mentioned is that, through practice, good setups can become habitual. And, repetition will soon create a feeling of what is correct.