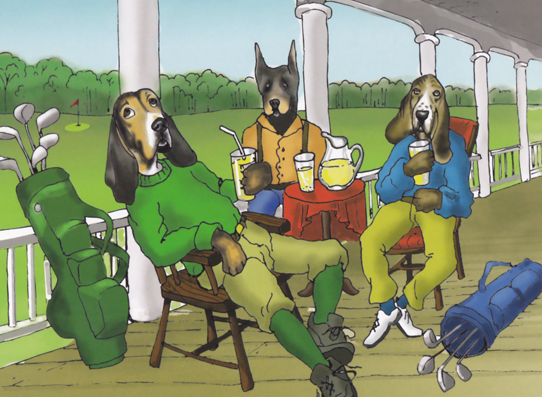 Introduction
In August of 2005 I celebrated my 50th birthday and welcomed the opportunity to compete in the senior golf environment. Now, a year later, I reflect back on my first full year of senior golf and share my experiences, observations, and thoughts about the future of senior golf.

Equipment
Over the last twelve months I’ve competed in a number of professional senior events and met several excellent professional players. I always find it interesting to observe the equipment and technology people are using. This year I met a gentleman from Eagle Flight Golf who has developed a shafting system based on a single (flat) frequency. I have incorporated this technology into my equipment and highly recommend this approach.

Whether you utilize the Eagle Flight system, Hot Stix, Golf Tec, or some other approach, the bottom line is customized club-fitting is readily available and affordable. No one needs to settle for off-the-rack equipment anymore, and that includes ball selection. If you haven’t taken advantage of these systems, you are missing out on stroke-saving opportunities.

And, if you have not incorporated these techniques into your teaching programs, you should. It’s a lot easier to help students progress if the equipment is properly fitted. Something as simple as proper lie angle adjustment can make a big difference in a student’s progression. And, we all know students that make good progress are our best marketing campaigns.

Fitness/Nutrition
This is the area I believe that has helped me be as competitive as I’ve been as a senior. I have always been physically active and sports-oriented, but starting last year I made a concerted effort to incorporate a regular regimen of strength training, cardio workouts, and stretching. I truly believe this had made a significant difference and will continue to help me remain competitive well into my senior career.

A fascinating book along this line is The Golfer’s Two-Minute Workout, by Peter N. Sisco and John R. Little. The two-minute strength workout has been my strength training regimen for about six months, and I believe it’s as effective as traditional strength training, based on my personal gains. The nice thing about this program it is golf-specific, based on tests done by the researchers. It doesn’t take much time and can be done with free weights or machines. I personally do my routine on a Bowflex. You can push yourself hard, but you don’t get the sore muscles like traditional workouts.

As for stretching, it goes without saying we lose our flexibility as we get older. To help in this area, I’ve been following a stretching routine developed by Roger Fredericks. Most of us have some familiarity with basic stretches for sports activity, but Roger’s program really targets golf-specific areas. I intend to really focus on stretching over the off-season, as I find I’m not as flexible as I presumed, or should be, at this stage in my life.

On a similar line, I’ve changed my nutritional habits significantly. As of this article I’ve been a vegetarian for almost one year. I did this after reading a book titled The China Study by T. Colin Campbell and Thomas M. Campbell, based on a recommendation I heard from Gary Player during a televised interview. As you probably know, Mr. Player was one of the early tour players to incorporate fitness and nutrition into his preparation as a golf professional, and still maintains a regimen that is inspiring.

The book convinced me to try a meatless diet, and to my surprise it has proven to be easier to follow than I would have ever imagined. More importantly, I feel great, and look forward to my season of competition after a year of incorporating all these changes.

Game Management
This is the area as seniors we are suppose to get smarter in with age. I do believe we learn to eliminate some of our wasted shots and get smarter about preparing for tournaments as we mature, but there is always room for improvement. Personally, I’ve improved my game management technique, but still have a ways to go before I’ll feel like my approach is solid. I’m focusing on three primary areas: practice approach, course strategy, and simplified swing thoughts. Since I’m an engineer, it’s typical of me to look at things from an efficiency standpoint. I’m trying to assess things to eliminate inefficiencies and errors that might save me a stroke or two, or make my practice time more effective. It doesn’t sound like much when someone says they improved by a stroke, but over the course of a three- or four-day tournament, that can make a big difference in the check we ultimately get.

As for practice routine, at the suggestion of several of my fellow competitors, I’m trying to change my approach to more playing time and less practice time on the driving range.

I easily fall in the category of a “range rat” as I simply love to beat golf balls. But, I have the tendency to beat balls and find things to fix that don’t really need fixing. Instead, I’m forcing myself to get out and put my skills to the test in real situations and only work on things that truly need polishing. Primarily, my range time is now spent with short-game issues. As one of my colleagues has reminded me, “If you are happy with your approach, go find a game and put it to the test.” It has been hard for me not to beat balls endlessly, but I do see the benefit and plan to play more and practice less, but be more effective when I do practice.

The other area I’m focusing on is course management. We all know the basic concept of managing our way around a course, but when playing tournaments I find I still have weak areas that need to be addressed. Primarily, I’m trying to improve my routing through the course; that is, making the shot to the green as easy as possible, even if that means taking a route off the tee that does not go down the middle of the fairway. Working back from the green to tee has really been enlightening on some of the courses I played this year. And, when playing practice rounds with some of the better tournament players I’ve met, they really get me thinking about angles of approach. I have known much of this for many years, but when you step up in competitive level, you find out this is an area that really separates the winners from the good players. I’ve im­proved in this area, but have a ways to go as I was one that always intended for the middle of the fairway to be the target. Earlier this year I had an event that I missed the cut in, and when I assessed the results, I had two holes both days that were a real struggle. In the final analysis, those holes were a struggle because I ended up in the wrong part of the fairway, making the approach shot to the green far harder than it needed to be.

I’d have been better off on the far side of the fairway, even if it meant being in the rough. That’s hard for me, but I am learning to adjust my approach. A pretty technique is nice, but in tournaments, score is the only test that counts.

I’ve also developed a keen interest in simplifying my swing mechanics. One of the observations I’ve made from the players I compete with is how simple they’ve developed their swings and the few thoughts they use to maintain their swings. The competitive players have simplified their swings to very efficient and repeatable movements that yield consistent, yet powerful, results. These senior players have learned what works for them and eliminated everything else.

Unfortunately, the trend of our industry is to dissect the swing into minute parts and try to teach students how to improve each part toward perfection. The senior players I’ve met are not focusing on minute parts. They have an overall goal in mind, and only focus on the one or two elements they’ve identified that will help them achieve that goal and be consistent in their performance. Also, they maintain a focus on playing the game rather than perfecting the swing. With today’s teaching trends, it is easy to get lost in perfecting mechanics and never really teach the student how to play the game. The better senior players have gotten beyond perfecting mechanics and play for better scores, which may not revolve around mechanical issues.

Perhaps there’s a lesson in this: “Simplify Your Teaching.” Also, at some point we still have to take our swings to the course and play the game. Some of the oddest swings on the Champions Tour also belong to the toughest players. They’ve learned to perfect playing the game rather than swinging the golf club.

Opportunities
As many of you know, the Champions Tour is the toughest card to earn, and has been for many years. With the new qualifying format, it will be even more difficult for all but the most accomplished players coming off the PGA Tour with strong pedigrees.

With that in place, it leaves a big opportunity for other senior tours to develop for the many senior professionals wanting to continue competing. There have been several attempts at senior mini-tours, but I believe we will see more focus in this area, with some significant events developing that offer reasonable schedules and costs, and, tournament purses that represent more than playing for entry fees.
Don’t be surprised if you see something like the Nationwide Tour for seniors. Bottom-line, demographics of baby-boomers will influence the future of professional golf as it has and will impact all other aspects of the American society. We have already seen this at the USGTF tournaments. In Las Vegas, we quickly observed the senior and super-senior divisions vastly outnumber the other divisions, and will likely continue to for the near future.

Concluding Remarks
Life as a senior has been good and I look forward to the 2007 season. I’m especially looking forward to the World Cup events in Las Vegas. I’ve already scheduled several senior tournaments on my calendar and look forward to the travels I’ll be making around the country. Now, it’s time to get back to work on my off-season goals. See you all in the fall for the 2007 World Cup.