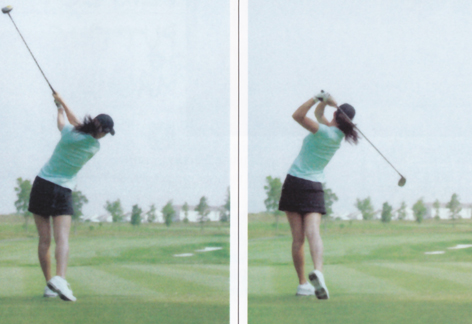 I agree with Johnny Miller, golf analyst for NBC television and former British and US Open champion, who has said this on more than one occasion: “Michelle Wie has one of the best swings in all of golf.”

Wie has been called everything from a child prodigy to golf phenomenon to golfing genius, as if she were born with the talent to set up correctly and swing super-efficiently, plus hit powerful shots. When, in fact, more than being blessed with good genes passed down to her from Korean parents, father B. J. and mother Bo, Wie has worked darn hard to evolve into the Tigress of golf and most exciting player to hit the links since Tiger Woods stepped onto the golf stage.

After reading this four-part series – based on my new book, The Michelle Wie Way, which reveals my analysis of how Michelle sets up, swings the club back, then swings down and through when hitting either a controlled draw tee shot (Parts 1, 2, 3) or power-fade drive (Part 4) – I recommend that you pass along each tip to your students in a step-by-step fashion.

Once you impress upon students the fact that Wie developed her skills through hard, honest practice, make sure that the person you teach grooves each vital element of the setup before letting them move on to the backswing, then learns all of the most critical technical points of the backswing before you teach them Wie’s downswing keys. This patient, professional way of instructing will instill confidence in the student and give each the best possible chance of rhythmically coordinating the movement of the body with the movement of the club, and hitting powerful drives which are likely to land on the short grass.

Let’s now begin this lesson on the setup and look closely at how Michelle Wie sets up to hit a controlled soft-draw based on what she learned from her father, on her own, and from coach David Leadbetter.

Grip
It’s no coincidence that Michelle grips the club with an interlocking grip, since Tiger Woods and Jack Nicklaus have made golf history relying on this hold that will give your student a better feeling of unity and balance between the hands. For years, the overlap grip was the most popular grip among tour players. However, these days, more and more players are switching to the interlock grip. The V’s formed by the thumbs and forefingers of Michelle’s hands point midway between her chin and right shoulder. This neutral position will best allow your student to swing the club back along the correct path and plane without having to make any compensatory adjustments with their left or right hand during the downswing to square the clubface at impact.

Wie sets herself apart from her fellow female professionals by laying her left thumb flat on the shaft, rather than curling it up. This long left thumb position provides extra support for the weight of the club as it reaches the top of the backswing, and gives Michelle
a little more leverage from underneath the club, in getting it started down toward the ball.

Ball position
When setting up to drive, Michelle plays the ball opposite a line drawn to the inside of her left armpit. This forward positioning will encourage your students to return the clubface to square at impact without any artificial manipulations, as well as virtually
guaranteeing a super-clean and solid upswing hit.

Stance
Michelle plays out of a closed stance, with her right foot dropped back slightly farther from the target line than her left foot. This setup position will give your student a feeling of added freedom in swinging the club along an inside path on the backswing. What’s more, this stance will promote a fluid, more active forearm release on the downswing. Thus, the clubface will close slightly at impact and impart draw-spin on the ball.

The most idiosyncratic feature of Michelle’s stance involves her left foot position; it is only slightly toed-out, perhaps just five degrees from being at a right angle to the target line. Michelle is so flexible that positioning the left foot virtually straight does not hamper her ability to turn her torso through the shot in the hitting area. If your student is flexible, and perhaps has a problem exaggerating hip clearance, he or she should try copying Michelle’s stance. This new left foot position can help a student create a solid left side “wall”
to turn around in the hitting area and ultimately hit stronger shots.

Posture
Michelle establishes what Lead­better refers to as the “ready position” by bending the knees only slightly, such that her kneecaps are directly above the balls of her feet, and bending forward from the hips so that her rear end is just slightly behind an imaginary line drawn across the backs of her heels.

Hand Position
Michelle sets her hands behind the ball slightly to encourage a longer takeaway and wide, powerful arc of the swing.

Head Position
Michelle’s head is fully behind the ball, as this helps her promote a strong turning action of the body and ultimately a powerful upswing club-to-ball strike at impact.