Were it not for the First World War, Ernest Jones’ life might have passed in comparative obscurity as a competent and respected golf pro in a provincial English golf club. In 1906, aged 19, he joined Chislehurst Golf Club, Kent, on the outskirts of London as assistant professional becoming the club’s full professional in 1910.

A slightly built man, Jones is remembered for the understated elegance of his swing and a hand action able to generate considerable club head speed. He played creditably in four English Open championships without ever threatening to win, and won a loyal following at Chislehurst for the quality of his teaching and the skill of his club-making.

Following the outbreak of the First World War, Jones, alongside thousands of his generation, decided to enlist and at the end of 1915 he found himself in the trenches of Northern France. In March 1916 he was badly injured at the Battle of Vimy Bridge. He returned to England with sixteen pieces of shrapnel in his head and body and without his right leg which had been amputated below the knee.

But Jones was not about to give up on golf. Four months after his army discharge and still awaiting delivery of his new false leg, he visited his old friend and fellow professional Arthur Havers, who was to win the British Open in 1924. With Jones still learning to use crutches and essentially hopping on one leg, they decided to play golf with Havers’ offering Jones a stroke a hole. This proved not to be necessary. Jones completed the first nine in 38 and tiring slightly came home in 45. Subsequently, with an artificial limb fitted Jones was regularly able to play par golf and even won a local professional competition in 1920. 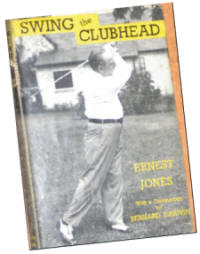 However with his tournament career at an end Jones decided his future was in golf teaching. He read widely on the subject and subsequently complained that most teaching manuals were too complicated and filled the players head, particularly beginners, with too many thoughts. He developed a simple mantra, ’Swing the Club Head’ which he would chant repeatedly during lessons. These ideas were encapsulated in a 1920 written by Daryn Hammond entitled ‘The Golf Swing: The Ernest Jones Method’. This book received considerable publicity in the United States and in 1924 he was appointed professional at the women’s National Golf Club in Long Island, never to return to his homeland. 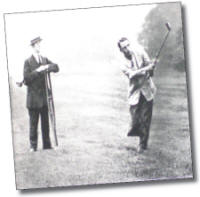 For over thirty years Jones taught from a dusty studio on the 7th floor of the Spalding Building on 5th Avenue Manhattan. Dressed in a double breasted blue serge suit Jones would give 3,000 half hour golf lessons a year. ‘There’s nothing wrong with any golf swing’ he would say, ‘the problem is you don’t swing.’ Pupils would then be handed a handkerchief tied to a pen knife to experience a swing rather than a hack. Swing rhythm might be enhanced by playing Strauss waltzes on a crackly gramophone. At 4.30 pm each day the last lesson would finish, Jones would take a whiskey, water and lemon juice (served in equal quantities) at his favourite bar and then commute back to his Long Island home.

The simplicity of Jones’ methods produced much debate and controversy within the USGA but this did not prevent his induction into their Teachers Hall of Fame after his death in 1965. His two books ‘Swinging into Golf’ and ‘Swing the Clubhead’ have never been out of print, and continue to influence generations of golfers of all abilities. His progression from the battlefields of France to golfing immortality via the skyscrapers of Manhattan is one of the most remarkable of sporting journeys.