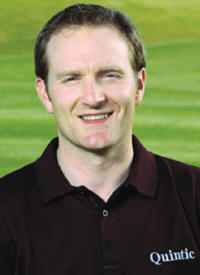 When it comes to studying the science behind using the flatstick, few golf coaches can match up to the résumé of Dr. Paul Hurrion. No less than Padraig Harrington and Lee Westwood are under the tutelage of Hurrion, who has a Ph.D. in biomechanics.

Hurrion was kind enough to take time from his schedule to talk with us at Golf Teaching Pro. He explains how he came into coaching putting.

“Track and field and cricket were my two main sports,” he said. “I went into golf really as a result of high-speed photography, looking at how clubs and balls impacted each other from an equipment side. That lead to looking at what the ball does on the putter. It was quite scary to see the little amount of time the ball spent on the clubface. In fact, it’s less than the driver.”

“Posture is everything,” he stated. “If your posture is out of kilter when you set up to a putt, you’re going to need manipulation to square the clubface. What I try to do when I teach putting is to take manipulation out of the stroke.”

Hurrion’s research led him to conclude there are important aspects in taking the setup, rather than merely trying to feel comfortable. First, from a square stance to the intended starting line, the golfer should bend slightly from the hips, knees slightly flexed. The weight should be either 50-50 between the left foot and right foot, or slightly favoring the left foot. Hurrion conducted a study that showed most amateurs set up with their weight favoring the right foot – a recipe to induce manipulation.

The upper arms should be against the body, but not pressing. The putter shaft is in line with the forearms, and the eyes should be over the ball. The putter should be soled directly under the center of the chest. Hurrion believes many golfers use a putter that is too long for them, preventing them from reaching this ideal setup. Finally, the putterface should be square to the intended starting line.

Interestingly, Hurrion says that working out is beneficial in achieving this proper posture.

“You can get into good posture without getting strong,” he said, “but the key thing is to hold that posture
during the stroke. It’s tough to stay still and keep in balance. If you start to measure the body’s center of gravity movement, it can be quite substantial even trying to stand still, let alone hit anything. Your body is constantly sort of moving around, because your heart is pumping and your blood is moving around your body.”

Achieving this posture is key to preventing or reducing manipulation during the stroke. The stroke itself involves maintaining the triangle formed by the shoulders and arms while keeping hand and wrist action out of the stroke. Hurrion believes that rhythm is very important, advising that the length of the follow-through be at least as long as the length of the backswing. The ball should be struck with a slight ascending blow. This can be achieved by placing the ball position one inch ahead of a line drawn vertically down to the green from the sternum.

Hurrion’s work with Harrington was particularly interesting. The reigning two-time Open Championship winner had too much body movement in his stroke.

“That was one of the very first things we tried to target,” said Hurrion. “If your body is moving during the stroke, and you got this half a millisecond that you’ve got to get the clubhead right when you hit the golf ball, it becomes very difficult to time the clubface being square if the body is moving. We wanted to eliminate the body movement and keep the pivot point of the stroke, which is the seventh cervical vertebra [editor’s note: the knobby one at the top of the back] and your sternum. That part of your body is effectively the hub of the putting stroke. If that is moving around, then you need hand-eye manipulation to try to square the clubface.”

A debate among golf teachers is the straight-back straight-through stroke vs. an arc stroke. Hurrion weighed in on this, too.

“Well, the putter can’t ever go straight back and straight through, because of the laws of the game,” he remarked. “The only way you can get it straight back and straight through is if the center of gravity of the clubhead is directly under the pivot point, and that would mean that the shaft would be vertical – 90 degrees – and the rules of the game says it has to be 80. That’s the most upright you can get a shaft.”

Hurrion has also designed a line of putters with GEL, based on the concepts that he teaches and the research he had done.

“GEL approached me about 18 months ago,” he said. “The putters are designed from an alignment point of view, from the grooves to help create forward roll, with the weight distribution in the head to increase moment of inertia. There are a couple of tungsten weights in the heel and toe that you can’t see that really do enable the ball to still go straight and have the same energy.”

The putters are also weighted differently than traditional putters, which have most of the weight at the bottom of the clubhead.

“Imagine if you are going to kick a soccer ball below the center of gravity, what happens?” he asked. “It goes up, and you get backspin. What I’ve done is bring the center of gravity of the putter’s face in line with the middle of the golf ball, so the energy of the putter goes through the energy of the ball, so you don’t have this spin effect.” Information on GEL putters can be found at www.gelgolf.com.

Hurrion has his own website, www.paulhurrion.com, which contains a number of educational articles that are of great interest to any golf instructor. Golf Teaching Pro once again would like to thank Dr. Hurrion for taking time out of his busy schedule to provide this interview. Dr. Paul Hurrion is affiliated with Groove Equipment LTD. For more information about Dr. Hurrion and Groove Equipment, please log onto www.paulhurrion.com