On an overcast foggy morning, host pro Tony Doroba launched the ceremonial first tee shot kicking off the 2nd World Hickory Match Play Championship at the Philadelphia Cricket Club’s St. Martins Course. The site of the 1907 and 1910 U.S. Opens once again experienced the thwack of wood-shafted golf clubs across the nine-hole layout, long since abandoned for championship play  due to advancement in club and ball technology. However, with the tools of long ago, the site was up to the challenge of hickory champions from across the globe. The layout has been meticulously restored to its early-1900s condition, and the routing has four of the original holes played in those early Open championships. 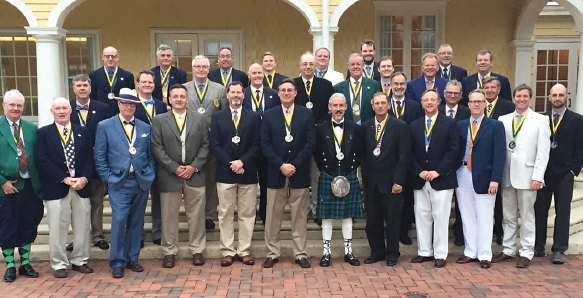 The World Hickory Match Play Championship is the brainchild of Brian Schuman, head of the Metropolitan Hickory Golf Association, based in Long Island, New York. Winners of hickory events
worldwide are invited to participate. This year, 16 players ranging from Switzerland to Seattle converged on the venerable club for the event played May 19-20, 2015. The format begins with round-robin play based on a random draw, with each hole being worth one point for a win and ½ point for a draw. Each contestant plays nine holes against another opponent, switching to a new golfer
upon completion of the nine-hole round. A total of five matches determines the fi nal four golfers, with the top two point accumulators playing 18 holes for the championship, and the other two playing for third place.

There is also a group called the Players Division, which consists of regional hickory golfers who are invited to play based on their performance in local hickory events or for their support of hickory golf in general. This group also consisted of 16 players and followed the same format as the Champions division. Both divisions required a playoff to determine the participants who would compete for their respective championships. Ben Hollerbach of Georgia ousted defending champion Jeremy Moe of Arkansas to earn a spot in the final against Claus Muehlfeit of Switzerland. Hollerbach then played superbly in the finals to take the championship trophy. In the Players Division, Deal Hudson of Virginia laid a perfect stymie on the 18th hole, forcing Greg Shayka of New Jersey to attempt an impossible chip over Deal’s ball to no avail, sealing the win for Hudson.

If ever there was a venue tailor-made for such an event, it is certainly the St. Martin’s course. The golf course, located in Chestnut Hill, was opened in 1895 and was designed by Willie Tucker.

The 1907 U.S. Open held there was won by Alec Ross, brother of famed architect Donald Ross, and during the championship the first hole-in-one in U.S. Open history was recorded. The 1910 tournament was won by Alex Smith in a three-way playoff against Johnny McDermott, who would become the first American to win the championship the following year, and brother MacDonald Smith. The field that day also included the club’s pro, Willie Anderson, the only golfer in history to have won three consecutive U.S. Open Championships. Unfortunately, Anderson’s magic was not to be as he finished a distant tenth. To play St. Martins today is to go back in time and enjoy a parkland course, with cross bunkering and distinctive greens unlike those of the modern era.

The night before the tournament began, the club hosted a champions dinner, where tournament director Schuman honored Mike Just of the Louisville Golf Company, one of the three remaining manufacturers still producing hickory clubs, with the Tom Morris Senior award for his contributions to hickory golf. Unfortunately, Mike, undergoing treatment for a serious illness, was unable to attend the ceremony. Accepting on his behalf was his good friend, this reporter, who is also fortunate to be the three-time National Hickory Open champion.

As the evening concluded, Mr. Schuman announced that the Cricket Club agreed to become the permanent home of the World Hickory Match Play Championship going forward. It was certainly a fantastic week for hickory golf and the players who love this form of the game. Although still a small niche, the number of players and tournaments have continued to grow for the last decade.  considering all the historic courses throughout the world that many believe to be unworthy challenges for modern equipment, playing these gems with hickory clubs makes them all relevant again. The St. Martins course demonstrated that length is not necessarily required to pose a quality test for championship play.